The mystical world of Avaland returns in 2023 with the fantasy symphonic power metal band's sophomore full-length "The Legend of the Storyteller" due out on March 31st, 2023 via Rockshots Records following their 2021 debut "Theater of Sorcery".

“This song is the first one I composed for this album. It defines the atmosphere for this new album: darker than “Theater Of Sorcery”, but also more epic, especially with its mighty chorus (with some Blind Guardian influences). It’s a mind-sticking song, beware of this infernal hook “Crimson! Tyranny!”. The title of the song is a tribute to “In the Court of the Crimson King” by King Crimson." adds Adrien G. Gzagg.

Compared to its predecessor, “The Legend Of The Storyteller” is heavier and is a much more epic power metal record full of anthems upon anthems for fans to chant to as they are taken on a journey over twelve theatric tracks. The record also hears double vocal duties from Adrien G. Gzagg and Jeff Kanji along with album guests that include Zak Stevens (ex-Savatage/TSO), Madie (ex-Nightmare/Faith In Agony), Pierre “Cara” Carabalona (Eltharia), Ivan Castelli (Lionsoul), Angèle Macabiès, Jens Ludwig (Edguy) and Bruno Ramos (Sortilège/ex-Manigance).

Lead by Adrien G. Gzagg (Autor/Composer/Lead Singer/Synths and Orchestrations), the album's storyline is a prequel to the band's first album "Theater of Sorcery" as he explains further:
"This album, as the first one, is a journey, a trip out of our world, into the universe of Avaland. We enjoy seeing Avaland as a great saga, as a movie, or series. We feel like listening to Avaland is like watching Game Of Thrones, The Lord Of The Rings, or reading comics, it’s an escape from everyday life. For this album, we took a lot of inspiration from Game Of Thrones and Arthurian Myths. We love fantasy and mythologies and we also find ourselves having a great fascination for alchemy and esoterism. Time is also a great subject, it's mystical… in fact, time will be at the center of this saga. This new opus is showing a heavier and darker atmosphere of Avaland’s theatrical universe. Are you ready to be part of “The Legend Of The Storyteller”?"

In additional news, Avaland will be touring Europe during spring 2023 supporting legendary bands Rhapsody Of Fire and Sortilège.

Avaland is recommended for fans of Savatage, Angra, Avantasia, Symphony X, and Queen. 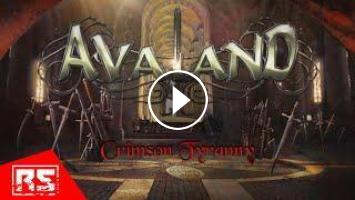 The mystical world of Avaland returns in 2023 with the fantasy symphonic power metal band's sophomore full-length "The Legend of the Storyteller&...