DRAGONY - Made Of Metal (Guitar Playthrough)

Dragony officially introduces guitarist Matt Plekhanov as new band member! After it was recently announced that longtime guitarist and founding member Andreas Poppernitsch would depart from the band due to increasing commitments outside the band, the vacant spot has been officially taken over by Matt, who has already been working with the band behind the scenes for almost two years, and who has already been replacing Andreas on recent live shows and tours.

Matt is an accomplished guitarist, who is not only the guitarist and songwriter for his own progressive rock band "Red Eye Temple", but also operates his own recording studio "RET Records" in Vienna, Austria, and contributed significantly to the songwriting for the band's latest album "Viribus Unitis", notably co-writing most songs together with singer Siegfried Samer and keyboard player Manuel Hartleb, including songs like "Magic", "AEIOU", the title track "Viribus Unitis", and the mid-tempo anthem "Made of Metal (Cyberpunk Joseph)".

DRAGONY - Made Of Metal (Guitar Playthrough) 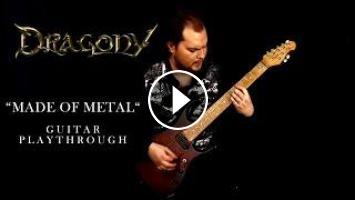