Foreigner is universally hailed as one of the most popular rock acts in the world, racking up scores of smash hits, multi-platinum albums and sold out concert tours. From ‘Cold As Ice’ to ‘Hot Blooded’, ‘Urgent’ to ‘Jukebox Hero’, ‘Waiting For A Girl Like You’ to the chart topper ‘I Want To Know What Love Is’, Foreigner‘s thrilling mix of blustery blues and impeccably crafted pop continues to captivate generation after generation of music fans.
After Lou Gramm left the band, Kelly Hansen joined Foreigner as a vocalist in 2005 and soon showed that there is no reason why stopping an era of great success, plati- num awarded albums and a number of hit singles as it happened to many bands before. Quite the contrary. Foreigner kept their strong legacy to the band’s prestigious past.
Kelly Hansen is simply one of the most gifted rock voices you can find today. His stage presence is impressive. Together with Mick Jones he started a new life for the band.The first album with Hansen “Can’t Slow Down” has reached Top 20 chart positions in the USA, Germany and England and charted in the Top 40 mostly everywhere else in the World.

"Live in Chicago" shows a band which is delighted to perform in front of their most devoted fans in an intimate atmosphere. Recorded at the Arcada Theatre in St. Charles, Illinois, USA, the band played an energetic 85-minute set to a cheering audience, including all their hits. 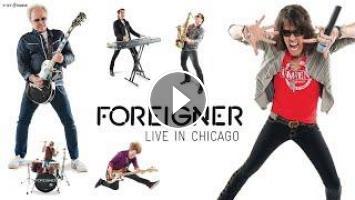 Foreigner is universally hailed as one of the most popular rock acts in the world, racking up scores of smash hits, multi-platinum albums and sold out...