FORTIS VENTUS - My Death is My Devotion (LYRIC VIDEO)

Rockshots Records will be releasing Fortis Ventus' debut album "Vertalia" on June 3, 2022. Combining symphonic and cinematic elements along with soundtrack influences, today the Greek trio unveils their first single off the forthcoming record. Entitled "My Death is My Devotion", the song captures the pain and faith behind the sacrifices for the ones we care about from the emotions driven by love and loyalty.

"An epic orchestral intro brings us to stormy seas only for the rhythmic triplets to ground us as the catchy melody gets stuck in your head. The vocals sing long notes while the band and orchestra keep a groovy rhythm going. Then it quiets down to a somber voice that is filled with emotion only for it to return even stronger than before." adds the band.

Sentimental, dramatic, grand, cinematic, and imaginative, "Vertalia" is a concept album based on a novel-fairytale written by keyboardist George Halliwell.

"Twelve chapters for a total of twelve tracks". says, Halliwell.
The theme of this fairytale focuses on an imaginary planet called Vertalia, where the main character starts their journey to discover their inner truth and the truth of life itself. Through the challenges they face during their journey back to Earth, they connect with their higher self and take a path to eventually achieve inner peace back towards their homeland of Vertalia.
"The audience will be surprised at the intricate orchestrations that hide behind complex melodies on this album. Each person hearing it, will find a glimmer to empathize in every track. We wanted to tell a story and give the listener a variety of feelings and a journey alongside the lyrics." adds the band.

FORTIS VENTUS - My Death is My Devotion (LYRIC VIDEO) 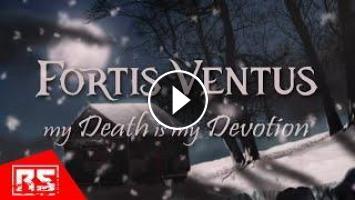