Frayle’s newest single and video may be their most gripping yet. The ritual doom metal act, featuring frontwoman Gwyn Strang and guitarist Sean Bilovecky, is partnering with Knotfest.com to premiere the video today. Filmed in New York City and Salem, Massachusetts, the infamous site of the Salem Witch Trials, the provocative art piece is a powerful meditation on empowerment and shedding the mask to reveal the true self.

The imagery of a female 'goth' roller skating past the house that was once lived in by a judge that was personally responsible for the executions during the Salem Witch Trials is powerful to us.”

As Knotfest.com declares, “Embracing a unique balance of doom that encapsulates an element of the harmonious and the hulking, the band’s pedigree spans a sophisticated stylistic spectrum … Anchored by Strang’s often heartbreaking, harrowing vocal harmony is countered by Bilovecky’s metallic blare – the kind of lumbering guitar riffage that layers with suffocating heft.”

“Bright Eyes” is from Frayle’s forthcoming LP, Skin & Sorrow, which will now be released September 23 via Aqualamb Records.

Skin & Sorrow was fully written and recorded by Bilovecky and Strang from the third floor of their own studio, on the edge of Cleveland, surrounded by ancient lakes and woods that echo the howls of coyotes. The band is rounded out live by Jason Knotek on bass and Jon Vinson on drums.

The record follows Frayle’s groundbreaking debut 1692 in 2020 that further introduced the world to their penchant for creating “lullabies over chaos.” Tracks feature Strang’s ambient vocals laid over the voluminous instrumentals of Bilovecky (formerly of Disengage), morphing into disturbing harmonies best described as music for the night sky and are poised to dominate the doom circuit.

In addition to haunting original tracks that push heavy music into new dimensions (an inspirational mix of Sleep and Portishead, or Black Sabbath and Bjork), the duo is known for their cryptic covers including takes on Johnny Cash’s “Ring Of Fire” and Bauhaus’ “Bela Lugosi’s Dead.”

Recently, Frayle signed to The Oracle Management, now part of the roster that also includes Cradle of Filth, DevilDriver, Jinjer, Wednesday 13 and more hard rock and metal acts all represented by co-owners of The Oracle Management Dez and Anahstasia Fafara. In one of the first orders of business, Frayle joined on for Cradle of Filth’s “Existence Is Futile” Headlining Tour. 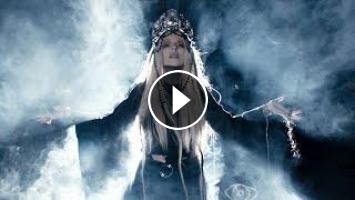 Frayle’s newest single and video may be their most gripping yet. The ritual doom metal act, featuring frontwoman Gwyn Strang and guitarist Sean ...