GOATWHORE - Death from Above

BUY HERE: http://www.metalblade.com/goatwhore
Storming into their twenty-fifth year as purveyors of the most ruthless extreme metal, GOATWHORE returns with their long-awaited new full-length, "Angels Hung From The Arches Of Heaven", set for release on October 7th via Metal Blade Records!

Unquestionably their strongest, most accomplished album to date in sound, concept, and execution, "Angels Hung From The Arches Of Heaven" emits forty-seven desolating minutes of the band’s trademark fusion of death, black, thrash, and classic metal. Delivered with breathless intensity and an unapologetic bloodlust, the twelve-track offering stands among the most thrilling records to come out of 2022. “I would describe this record as being very raw, but clarity is shaped within the chaos,” reflects vocalist Louis Ben Falgoust II. “It’s a journey of everything we’ve done and some new approaches as we advance forward. When we write, we mainly focus on the music and what we enjoy about playing it. We don’t write just to appease others. We want to enjoy playing it in a live setting as well, especially night after night on the road.“

GOATWHORE - Death from Above 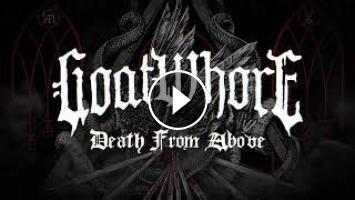 BUY HERE: http://www.metalblade.com/goatwhore Storming into their twenty-fifth year as purveyors of the most ruthless extreme metal, GOATWHORE returns...