March 2, 2019 will be remembered as one of the most important nights in Night Demon history. The location was Hamburg, Germany, long a second home for the band on their frequent European sojourns through the years. The occasion was the sold-out Hell Over Hammaburg Festival, which Night Demon had the honor of headlining. That night, the famous Markthalle venue was teeming with 1,000 die-hard metal maniacs from around the globe, waiting impatiently for the Ventura, California-based trio to put an exclamation point on the weekend’s festivities. But Night Demon had a special surprise up their sleeves for the Hammaburg faithful. You see, on this night they did not come alone.

Over the previous few months, Night Demon had been working in a spinetingling cover of the Scorpions’ classic “In Trance” into their live set for certain high-profile gigs, to rapturous crowd response. For the Hammaburg gig, revered former Scorpions guitar slinger Uli Jon Roth, who was an integral part of the In Trance album in 1975, agreed to join Night Demon onstage for a two-song vintage Scorpions encore consisting of “In Trance” and “Top of the Bill.” Roth’s appearance was a scrupulously guarded secret, unknown to all outside of the inner circle of band and fest organizers. When the big moment finally arrived at the end of a sweat-soaked, 15-song pummeling, it was nothing short of magical. 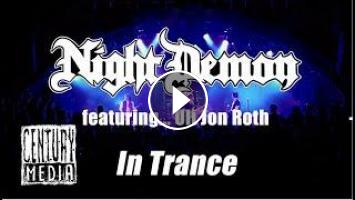