Brazilian Old School Thrash Metal band based in Sao Paulo, SACRIFIX, led by Frank Gasparotto (vocals/guitar). "Thrash Again" is part of the latest EP "The Limit Of Thrash", released in March on all digital platforms as a preview of what is to come soon, and in it we have a typically old school Thrash Metal, fast, catchy and with lyrics full of quotes that a fan of the style quickly recognizes.

Featuring three tracks, the other being a cover for "No Limite da Força" (Anthares, legendary brazilian thrash metal band who Frank Gasparotto is a former member) and a demo version of the title track from the previous album "World Decay 19", this release has been highly praised by the critics worldwide for containing all the nostalgic and typical elements of the 80's Thrash Metal with a lot of energy, harshness and aggressiveness.

The band, which also counts with the bass player Kexo (Infamous Glory) and drummer Gustavo Piza (Infamous Glory), is in the process of recording the new work scheduled to be released in the second half of this year.

Frank Gasparotto comments: "This song delivers raw energy with no mercy for unfaithful thrash metal ears. On the other hand, It's a sort of evolution on guitar techniques and arrangements as well. It is a typical 80's Thrash Metal, fast, catchy chorus and the lyrics are full of quotes a thrash metal fan would recognise instantly. The first riff was taken from a song I wrote back in 95, recorded by a band I had at that time called Maniac, with Kexo and another guy. That riff was in my mind for years so I had to try it again with Sacrifix. The original song title was “Metal Banger's Way” with different lyrics, but I had to rewrite the lyrics and added some parts here and there. It is a good example of what's coming next on Sacrifix's new album".

"The Limit Of Thrash" was produced once again by Frank Gasparotto, with mixing and mastering by Marco Nunes (Chaosfear) at Tori Studios, in Sao Paulo/Brazil, and cover concept by Frank as well. 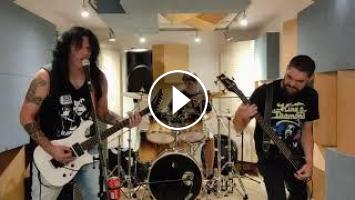