Resurfacing from both global and deeply personal unrest THE MACHINIST have returned and are set to leave their own indelible mark on 2022 with their idiosyncratic blend of extreme metal and hardcore on their new album, All Is Not Well, set for release via Prosthetic Records on July 8.

Resuming recording as the world tentatively took to recovery, THE MACHINIST teamed up with Daniel “DL” Laskiewicz (Bad Wolves, ex-The Acacia Strain) to produce, mix and master their sophomore effort, with help from Ice Nine Kills’ Ricky Armellino for vocal tracking. The time spent in isolation and witnessing the horrors of police brutality (explored on lead single, PIG), inflammatory politics and minority communities coming to terms with loss sits restlessly within the marrow of All Is Not Well’s lyrical themes. Sonically, Gomez’s penchant for converging both death metal brutality and intricate melodic metal and hardcore serves as a counterpart to All Is Not Well’s excoriating kickback at a world in crisis.

Standing tall in 2022, THE MACHINIST discards solipsistic tunnel vision for a wider scope of the personal and political. All Is Not Well refuses to resign in the face of the current climate's ongoing political and personal divisions, opting instead to shine a light and give a platform for the chance of hope. 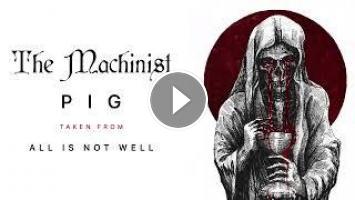 ORDER HERE: https://lnk.to/TheMachinist Resurfacing from both global and deeply personal unrest THE MACHINIST have returned and are set to leave their...