THIRTY FATES - Because We Fly (VISUALIZER)

"Circus Black" is a nine-track anniversary record to celebrate the trio consisting of brothers Elias and Nick Tzintzilonis and Stelios Papakostas thirty years in heavy metal as friends and bandmates.

The full length of classic melodic heavy metal is four tracks (Indifferent People, The Edge of Destiny, Be Free, The Pretender) from their 1991 demo, two unreleased tracks from the ’80s, and three tracks from Black Fate's 2001’s rare EP along with a brand-new song. The album is for those who truly enjoy 80's classic heavy metal in the vein of Iron Maiden, Judas Priest, Queensryche, Dio, and Ozzy Osbourne. There are also guest vocals Tim 'Ripper' Owens and Angel Wolf Black.

The history of Thirty Fates begins in 1988 when they introduced themselves to the world in a band named Metal Invaders, which was soon changed to Black Fate. Under that moniker, they released a 4-track demo (1991), but soon after Elias (guitars) continued on to other various bands. Stelios (vocals) went on to a solo pop career releasing singles and touring all around Greece, along with forming the band Blow. Nick (drums) went on to other rock-heavy-pop bands, touring also as a freelancer and continuing on with Black Fate with four amazing musicians, where they released a self-titled EP (2001) and four full-lengths "Uncover" (2002) (Secret Port Records), "Deliverance of Soul" (2009) (Asiral), Between Visions & Lies (2014) (Ulterium Records) and "Ithaca" (2020) (Rockshots Records).

The trio of Thirty Fates explain how their reunion came to be:
"We felt the need to reform the band after so long time for our thirst of playing music together again. It came out spontaneously when we met each other five years ago, rehearsing the old staff reminiscing the good old times. Then we decided to re-record our first demo and some spare old songs, as we had all the efforts for making a record come to life. Seemed from the beginning we knew what exactly we wanted to do. Making music after so long, was a joyful ride from the past to the present & we really enjoyed it. For all our friends & loyal fans, who have followed for thirty years & also for our new friends. We hope you enjoy our music. It’s worth a listen."

THIRTY FATES - Because We Fly (VISUALIZER) 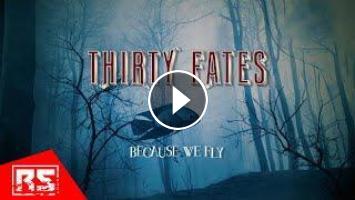