Today the spotlight is being focused on Norwegian solo metal artist Anniken and her latest single off her forthcoming debut album "Climb Out of Hell" on May 13, 2022 via Rockshots Records.

Entitled, "Spotlight", the single and album opener kicks is a track that many musicians can relate to. It's about the anxiety and desire for success along with the love and hate relationship of being up on stage with the spotlight focused on you.
Digital - https://bfan.link/Spotlight​

Anniken has been a part of the Norwegian heavy metal scene for years with her band Darkest Sins, the studio project Ana – Metal for Charity, as well as being a part of her husband Marius Danielsen’s trilogy Legend of Valley Doom, both in the studio and with the live band. While in Darkest Sins she opened for bands such as Anthrax, Jorn, TNT, and UDO along with Legend of Valley Doom she has worked with legendary musicians such as Ralf Scheepers, Amanda Somerville, Roland Grapow, Matt Barlow, Doogie White, Jennifer Batten, and also actor John Rhys-Davies from the Lord of the Rings and Indiana Jones movies.
Writing her own songs and having a profound love of lyrics, Anniken is now progressing into her solo endeavours. Anniken's debut album "Climb Out of Hell" features nine tracks, a few of them co-written with her husband Marius Danielsen.
It is a varied metal album that is melodic, raw, and catchy with different types of songs for every kind of metal fan. Some slow, some fast, most of them heavy. Some of the songs have a deeper meaning to them, while others are just exactly what you think they are. 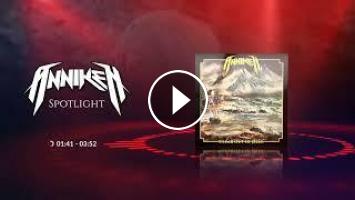 Today the spotlight is being focused on Norwegian solo metal artist Anniken and her latest single off her forthcoming debut album "Climb Out of H...