New York City band SUNLORD have released a live video for the track 'Like A Champion' from Montreal show at Foufounes Electriques on 04/30/2022. The track that comes off their self-released album '222'. The videos were recorded by TeamMontrealMetal in Canadian and edited by Promusicvideo in NYC.

"We were very happy to finally get into Canada and do our job for them . Great shows ,specially Montreal, incredible crowd . The band is delivering night after night , we have been to Pennsylvania and Ohio and we are heading to Detroit as I type this . This is the best metal tour out there this year and people gotta come out cause Destruction puts on a top knot h performance , better than  most on this earth . I gotta ad this is a really hot line up I put together for Sunlord and it might just be my favorite to this day ."

Sunlord is a heavy metal/punk rock NYC band that has been rocking the tristate area underground for long years and actively touring the nation ,South America and Europe since 2015 . Formed by Argentinian American frontman Alfonzo Ferrazza, Sunlord has two albums released independently.

Sunlord live band will be touring as: 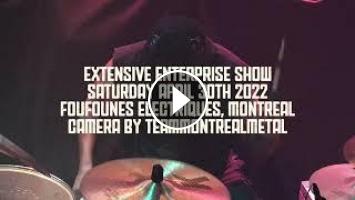 New York City band SUNLORD have released a live video for the track 'Like A Champion' from Montreal show at Foufounes Electriques on 04/30/2022. The t...