Releasing their self-titled debut album this coming April 2022 via Rockshots Records, Theigns & Thralls are sharing their first single "Drinking" with a new music video that will encourage to gather your friends and share some pints!

Band founder Kevin Ridley adds about the track:
"Once I got into the flow of writing and recording the album, things came together quite quickly. Like with this track. When I came across an old poem (by Abraham Cowley) called ‘Drinking’, I thought folk-metal and drinking, what could possibly go wrong? Again, this song has a big chorus and I thought it would be good to ask all the people playing on the album to add some backing vocals and do a little video of themselves recording it so we could make it into a video. This was so successful that I decided to do a different mix of the track for the video. So, you have the ‘Theigns mix’ for the video (which is shorter) and the ‘Thralls mix’ (which is the album version). This mix also contains the ‘drunken guitarist’ intro, which you might witness at gigs. It is a BIG song with lots of players on it, including Emilio (Souto) on guitar, Jonne (Järvelä) on mandolin and Dave (Briggs) on whistle. It’s a bit of a ‘a folk-metal anthem’, hopefully."

Theigns & Thralls is the brainchild of Skyclad vocalist and songwriter Kevin Ridley. Originally, it was intended to be an ‘occasional band’ to perform songs from Ridley's back catalogue of songs from Skyclad and his solo album while working around Skyclad’s touring plans. However, when the 2020 global pandemic struck, his plans changed. Being stuck in lockdown, the project became a collaborative recording project building on a few demo ideas. At first, musician friends were contacted to add a bit of violin here and a whistle there. But then things gathered momentum and friends of friends were also asked and players across Europe joined to contribute. The response was, to say the least, overwhelmingly positive and, in the end, twenty-five musicians from bands such as Korpiklaani, Ensiferum, Cruachan, Waylander, Celtibeerian, and Metal De Facto as well as solo musicians (new and old acquaintances of Ridley) contributed everything from drums, bass, guitar, violin, whistles, bagpipes to hurdy-gurdy and vocals.

"I think that because a lot of the album was written and recorded in a fairly short space of time, there is a certain feel and continuity to it. There is a blend of Celtic Speed-Punk, Folk-Metal and Classic Rock influences. Added to that, in terms of lyrical content, there is a strong appreciation of history, literature and humanism that comes together." adds Ridley.

As well as putting out the album and videos, the next phase of the band’s evolution will be to put together a ‘touring band’ when permitted, not only to do what was originally intended, but also to perform the new original songs - perhaps with a few guest artist appearances - and to become a force in their own right.

As well as putting out the album and videos, the next phase of the band’s evolution will be to put together a ‘touring band’ when permitted, not only to do what was originally intended, but also to perform the new original songs - perhaps with a few guest artist appearances - and to become a force in their own right.

Recommended for fans of Skyclad, Cruachan, Fiddlers Green, Flogging Molly, and Volbeat, Theigns & Thralls' self-titled album is due out April 8, 2022 via Rockshots Records. 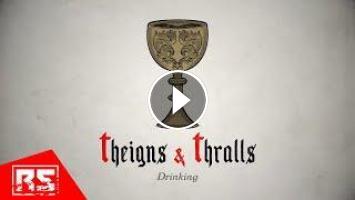