Band founder Kevin Ridley adds about the song:
"I decided early on to have an eponymous album, so the album had the same name as the band, but I also thought to go one stage further and add a song with the same name. As it is the opening song, I wanted it to up-tempo and be anthemic as it also conveys some of the band's underlying philosophy, in terms of its socio-political stance. Again, Dagda’s pipes helped to lift the song and I really enjoyed adding a bit of old-school harmony guitar here."

Theigns & Thralls is the brainchild of Skyclad vocalist and songwriter Kevin Ridley. Originally, it was intended to be an ‘occasional band’ to perform songs from Ridley's back catalogue of songs from Skyclad and his solo album while working around Skyclad’s touring plans. However, when the 2020 global pandemic struck, his plans changed. Being stuck in lockdown, the project became a collaborative recording project building on a few demo ideas. At first, musician friends were contacted to add a bit of violin here and a whistle there. But then things gathered momentum and friends of friends were also asked and players across Europe joined to contribute. The response was, to say the least, overwhelmingly positive and, in the end, twenty-five musicians from bands such as Korpiklaani, Ensiferum, Cruachan, Waylander, Celtibeerian, and Metal De Facto as well as solo musicians (new and old acquaintances of Ridley) contributed everything from drums, bass, guitar, violin, whistles, bagpipes to hurdy-gurdy and vocals.

Recommended for fans of Skyclad, Cruachan, Fiddlers Green, Flogging Molly, and Volbeat, Theigns & Thralls' self-titled album is due out April 8, 2022 via Rockshots Records. 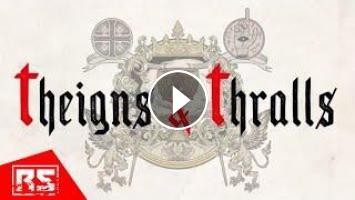 Releasing their self-titled debut album this coming April 2022 via Rockshots Records, Theigns & Thralls are sharing their new lyric video for the full...