Comments guitarist/vocalist Sakis Prekas, “ ‘Murder of Crows’ is about the loneliness of death, the greatest mystery of what the end of life’s circle feels like and the emotions surrounding the very last moments of life. The concept of death in W.E.B. lyrics is not new, only this time, the inspiration was born after watching the ‘Sons of Anarchy’ series and the way life, death and morals were perceived in there by a culture that was yet unknown to me. Hence there are clearly several lyric references to the series, it is strongly filtered by W.E.B.’s music style combining melody, brutality and symphony elements. The video of ‘Murder of Crows’ incorporates much of the band’s stage presence accompanied by the roles of Thanatos, the subconscious and the madness of reality. “

Lyrics:
Darkness, blindfold, terrorized
Fear takes over. Victimized
The leaves they fall, the sky turns gold
My dear black angels scream their call
The gathering begins
Come on dear sons of mayhem. We kill to live
Come on dear sons, this wake will cease to be
Carry my soul, my coffin, my every sin
Sing to me your cry. Your every fear

I was alone. I was afraid
Left in this world who’s gone astray
Save me – crows gather for my death

Sunset, the last one I leave behind
My soul is crossing Acheron
Charon is my only friend in my inevitable end
A lament for the dead we sing to reach the skies
A lament for the dead, a dirge, the soul flies
Grief is the price. A grief that does not speak.
Words left unsaid. A grief like fear.

All this grief and the cries as the reaper hands tears
Staring black hollow eyes, I face death like a newborn scar
Crossing the other side, black feathers embrace my soul
In a murder of crows I’ll die. My last breath is yours

I was alone, I was afraid
Left in this world who’s gone astray
Save me – Crows gather for my death
Save me – we march this funeral with crows

About W.E.B. -
Since forming in 2002, Greece’s W.E.B. have steadily forged a path to becoming one of the premier European symphonic extreme metal bands expressing darkness and death through adrenaline and poetry. An output that’s both candid and theatrical, W.E.B. is here to move you, provoke you, and invite you on a journey through ravendark and starless nights. With four albums already under their collective belt, 2021’s fifth full-length, Colosseum, which was recorded, mixed, and mastered in Sound Abuse Production Studio in Athens by Psychon and produced by the band’s own Sakis Prekas, is inarguably the band’s greatest and most direct work to date.

Combining the brutal with the catchy and drenching it in orchestrations that only serve to expand its epic scale, Colosseum is a thrilling, gripping listen with each of its nine tracks playing an important part in the album as a whole, making it clear that W.E.B. stands toe-to-toe with anyone in their genre. 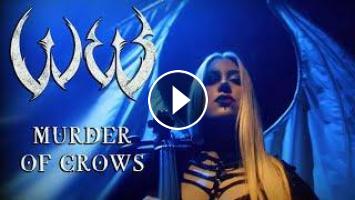