Art Pop artist ZØLTAN has returned with a new single, "Ai Ki Narabi', alongside an accompanying vibrant video that talks about the power of unity. He incorporates the sounds of contemporary urban culture, perfectly balancing the pop elements and symphonic orchestral arrangements.

Speaking about the song, ZØLTAN explains:

"Its message unfolds through a complex journey. It has a tribal feel; it is deeply spiritual but without intended connections to indigenous music or Eastern religions. 'Ai Ki Narabi' speaks about the beauty of togetherness in a non-propagandistic way."

For an artist whose haunting lyrical motifs and pensive languor captured the hearts of thousands of people worldwide, the newest single lets the reverb-drenched vocals and dreamy instrumentals speak directly to your soul. "Ai Ki Narabi" captures the depth of feeling so beautifully and intimately that it's almost impossible not just to close your eyes and let the song wash over you.

"Ai Ki Narabi" - words that hypnotically followed  ZØLTAN for the past few years from the unseen - has a kind of purity in its birth. You'll find yourself relating not just to the calm feeling of the song but to how it sounds both hopeful and melancholic, "We are strong together, together as one! Our dreams will take us beyond the sun!"

It's this fantastic journey to where ZØLTAN finds himself now that is encapsulated on "Ai Ki Narabi" - a state of mind he has worked toward his whole life, from his very first singles. The Romania-based artist has always written with startling candour on struggles of faith and sin, the loss of a loved one, nonconformism as a statement, love, and other emotional adversities, but his latest release reaches a pro-peace dimension without being political.

ZØLTAN adds, "here we have an almost naive song by its lyrical innocence and, in opposition, a distraught world that doesn't seem to care for such messages."

Going further, the song serves as an emotional catharsis for the artist, as it captures the need for togetherness. By featuring three guest artists, Andra Zelenak, Roxana Zăpârțan, and Mishu Călian, "Ai Ki Narabi" is poised to join the international art pop greats. Perhaps, it's the black and white visual context that makes the track somewhat nostalgic, but there is a kind of familiarity to it.

Built on four voices, heavy tribal percussion, and electro and symphonic orchestra elements, the song is diluted enough to let your mind wander and allow you to project your own experiences into it. 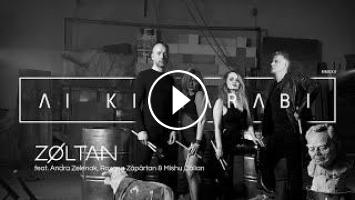 Art Pop artist ZØLTAN has returned with a new single, "Ai Ki Narabi', alongside an accompanying vibrant video that talks about the power o...